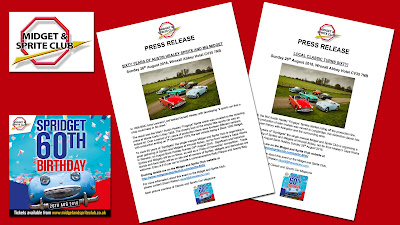 It's the 60th Birthday of one of Britain's favourite sports cars - the Austin Healey Sprite and MG Midget. The Midget & Sprite Club has organised a celebration of this milestone at Wroxhall Abbey Hotel on Sunday 26th August 2018. This prestigious venue isn't far from where the first Frogeye Sprite prototype rolled off the production line in Warwick.

The Midget & Sprite Club approached Harlequin Media Consultancy to create and distribute PR about the event to Classic Car Magazines and local newspapers in the areas that manufactured the marque - Warwick, Abingdon and Longbridge.

Promotion for the event is now well underway, so let's hope that this great British sports car gets the birthday it deserves. The general PR release is detailed below with links to the Club's website. 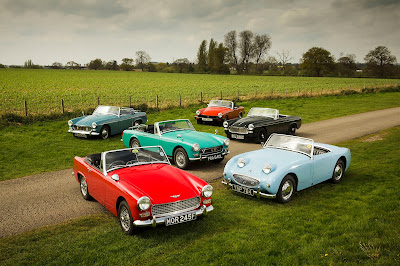 In 1956 BMC boss Leonard Lord tasked Donald Healey with developing “a sports car that a chap could keep in his shed.”

The result was the Mark I Austin Healey “Frogeye” Sprite which was unveiled to the motoring press at Monte Carlo in May 1958. The cheeky look of the simple little sports car was an instant hit. Over a period of 21 years of production there were fourteen different versions with production ending on 7th December 1979, the last vehicle being a Black 1500 Midget.

To mark 60 years of “Spridgets” the single marque Midget and Sprite Club is organising a great gathering of Sprites and Midgets at Wroxall Abbey, not far from Healey’s Cape Works in Warwick, on August Bank Holiday Sunday 26th August 2018. Significant and historical Sprites and Midgets will be on Show, as well as a ‘Pride of Ownership’ competition. Trade stands and food stalls will be on site and all owners of Sprites, Midgets and derivatives are welcome. Entry is £10 per car to include a commemorative Rally Plaque and Goody Bag.

Booking details are on the Midget and Sprite Club website at http://www.midgetandspriteclub.com/sprite-60th/

For more information about this event or the Midget and Sprite Club,
please contact Stuart Watson stuart@thewatsonz.com 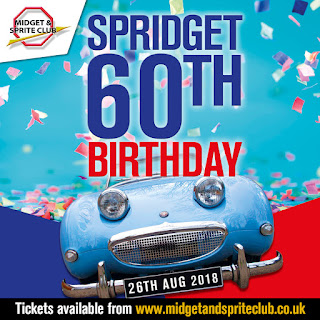 Posted by Mark Denison at 06:20 No comments: