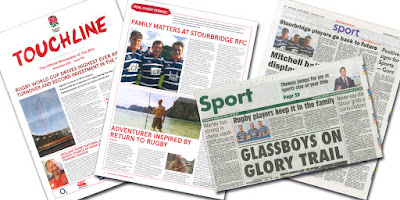 Stourbridge Rugby recently launched the RFU's 'Return to Rugby' initiative at the Club, aiming to attract former rugby players back to the sport. Harlequin Media Consultancy helped with the local launch which has been a great success for the Club and the RFU's campaign in the area.

Thanks to Return to Rugby, Dick Jeavons-Fellows, a former player and Chairman at Stourbridge, took the opportunity to have a run out with his twin sons, Alfie and Zac. The picture of the 3 family members created so much interest on the Club's social media channels, we decided to send out a piece of PR in the hope of creating some more interest - here's what we sent out:

Family Time on the Pitch Thanks to ‘Return to Rugby’


The RFU recently launched a new initiative called ‘Return to Rugby', aimed at encouraging players who have left the sport to get back into training and to turn out for the odd game.

Stourbridge RFC has signed up to this initiative, asking people in the local area to get back into playing, or even to throw a rugby ball around for the first time. The Club is holding regular Wednesday night training sessions, which are supported by RFU coaches to ensure that the players are eased back in gently. The next session is on Wednesday 23rd November 2016, starting at 7:30pm and will be hosted by RFU Regional Development Officer, Adam Blackford.

‘Return to Rugby’ player Dick Jeavons-Fellows, a past Chairman of the Club whose family has had a long association with Stourbridge, recently turned out for the Grasshoppers XV alongside his twin sons Alfie and Zac, who both play for Stourbridge Colts. The game was against local rivals Wolverhampton IVs and all three of the Jeavons-Fellows family managed to score a try in the closely fought win.

Dick said, “It was a great opportunity to play in the same team as the boys, it gives a whole new meaning to quality family time!”

The new RFU initiative has even inspired the current Club Chairman, Robin Edwards and Director of Communications, Mark Denison to put their boots on again. Mark commented, “With O2 Touch and Return to Rugby now being hosted at the Club, I can keep on top of my fitness playing a sport that I love. Next season I’ll also have a chance to play alongside my own son Jacob, as he will qualify for senior rugby.”

Stourbridge is also resurrecting its Gazelles XV to play a series of six games throughout the season on Friday nights against local Clubs that have also taken up the Return to Rugby initiative.

We didn't realise how much interest this would create when it was first sent out. The Stourbridge News, Stourbridge Chronicle and Express & Star all ran with it, as it was good local story. However, it didn't stop there. First of all, the best-selling Rugby magazine, Rugby World, agreed to publish the story, making it a truly national (maybe even international) story. Then the RFU asked for permission to approach Dick and the twins for a more in-depth interview for their website and their monthly newspaper, Touchline.

As a result of all this positive coverage, the twins have now been approached by Channel 4 to appear on a programme they are making in the New Year about twins - they were only too happy to oblige.

This was the first PR job taken on by Harlequin Media Consultancy, which has been a resounding success for Stourbridge Rugby and the RFU.

If you'd like more information of getting your company, brand or general news noticed, please give us a call on 07875 337295 or e-mail communicate@harlequinmediaconsultancy.com
Posted by Mark Denison at 01:12 No comments: 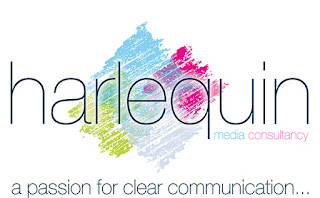 What a week it's been! After more than 11 years at Porter and Woodman, I've finally taken the plunge and started up on my own - Harlequin Media Consultancy has opened for business!

I won't lie, it's not going to be easy starting from scratch, but we're all excited about the prospect of starting something fresh and new; and hard work has never been a problem, whether it's for myself or my clients.

Here's a brief outline of what Harlequin will be offering:

Marketing & Communications
A single channel campaign or co-ordinated delivery of a campaign across all of the media below.

Training
On-site staff training on all of these services to enable the client to take control of their own projects.

PDF File Conversion
Have you been supplied with a PDF file that you can't edit? We can convert PDF files to Microsoft Word, PowerPoint or Excel; or Photoshop PSD or jpeg files for you.

PDF Conversion Prices - £5.00 set-up charge and £2.50 per page - a 10 page document would therefore be a total of £27.50. Discounts available for larger documents. More complex formatting requirements will be quoted on a job-by-job basis.

Posted by Mark Denison at 04:30 No comments: